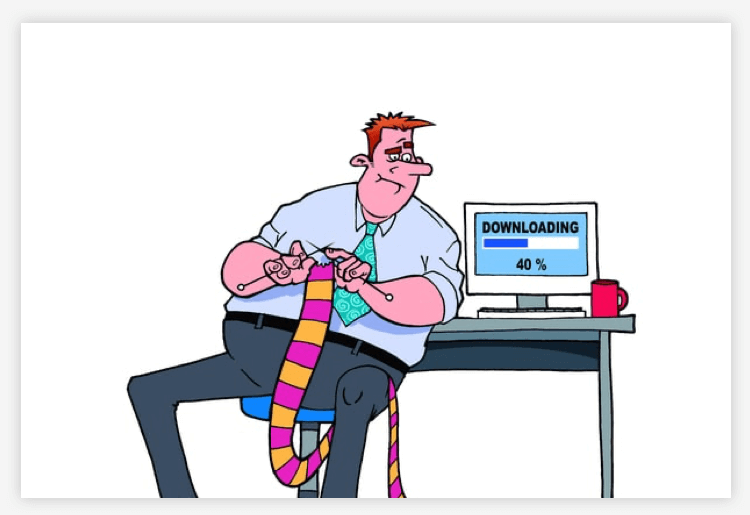 Virtual private networks (also referred to by the abbreviated term "VPNs") are a great way to protect your anonymity and privacy while on the Internet. Traffic is rerouted through a secure connection, making sure your private information

Ever tried to stream a video while using a virtual private network (VPN), only to have it grind to a halt? You’re not imagining things: VPNs can reduce your internet speed by up to 75%. But you don’t have to settle for that.

Why Does This Happen?

VPNs re-route all of your internet traffic through a secure connection, making sure your private information always stays that way. However, because everything is being funneled through this virtual "middle man" before reaching its destination, a slow VPN service could potentially drag your bandwidth right down with it.

This means that, after a certain point in the journey, the information you are sending and receiving has to deal with the speed of the virtual private network in addition to the speed of your own Internet connection.

What Can I Do About it?

When you’re deciding which VPN service to use, make sure you choose one that operates as fast as possible so you don't experience any lag while doing important work online. Check out Express VPN and see all the features they have to offer.

When you’re using a budget price VPN, speeds of as low as two to four megabytes per second are all too common, even if you're paying for a much faster connection from your Internet service provider.

How Do I Make Sure I Don’t Get Stuck With a Slow Coach VPN?

Selecting a VPN service that runs as fast as possible means that you do need to look for a few key factors.

First, Where Is it Located?

Find a virtual private network that operates close to your physical location. It’s something few people think about when they’re dealing with online resources, but in fact, you can take care of many speed-related issues concerning virtual private networks by making sure information doesn't have to go very far to reach its server.

This is because the further information is required to travel from Point A to Point B, the longer that information will take to complete its journey.

If you were to choose a VPN that operates in your area, for example, you would see a noticeable speed increase over a similar server that operated in another country. It just doesn’t have as far to go.

Second, How Many Servers Does It Use?

The total number of servers that a VPN company operates will directly affect how much traffic it can handle, so be sure to find a virtual private network that has as many servers as possible.

The better equipped a service is to handle traffic, the faster that traffic will be able to go.

It’s like opening up more cash registers when you have a queue of people all rushing to the checkout at once. If 1000 people are all trying to use the same single VPN server, each one of these people will essentially have to wait their turn before their requests can be processed. If those same 1000 people use a VPN service with many servers, the wait time will be decreased considerably.

With more and more people getting wise to internet privacy issues all the time, VPNs are more popular than ever before. This means that the cheaper (or free) VPN options out there are increasingly overloaded. If you want to avoid getting stuck in a virtual traffic jam, and want to manage data transfer speeds of at least 15 megabytes per second on a regular basis, you need to make sure you choose a service that provides multiple servers all over the world.

Follow these tips to choose the fastest VPN and you’ll be back to usual viewing speeds in no time.